The Town of Fort Myers Beach maintains 26 public beach accesses on Estero Island. These are marked and easily accessed from Estero Boulevard. Many of the accesses also have public parking, and 24 of them are ADA accessible either by mobi mat or ramp.


The Beaches of Estero Island


Fort Myers Beach is a favorite destination of many locals, snowbirds and vacationers. The island boasts miles of white, sandy beaches along the Gulf of Mexico, where the ocean floor slopes gently towards the horizon with no sudden drop-offs or big waves. These beaches are the perfect place to spend the day, and the breathtaking sunsets are known over the world. Check out The Great Calusa Blueway which is a paddling trail throughout Southwest Florida.


Bowditch Point Regional Park is 17 acres that is located at the northern tip of Estero Island. It is actually a dual use facility in which approximately seven acres are a developed park for passive recreational use and the remaining 10 acres a restoration/preserve area. The gulf front is more active while still providing a relaxed atmosphere for walkers, swimmers and sunbathers. Walking trails, through the restoration/preserve area, carry you through varied environments and offers an excellent opportunity for bird watching while being highlighted by panoramic views of Estero Bay. The park area also features tables and grills, available on a first come first served basis, in a shaded tropical setting sure to please any picnicker. A concession area offers visitors a place to rest, a variety of food items, gifts and souvenirs. Restroom and changing facilities are available as well. For more about Bowditch Point Regional Park, including parking information, please follow the link above.

Lovers Key State Park is between Fort Myers Beach and Bonita Beach. Please follow the link above for more information.

Lynn Hall Memorial Park and the Pier are owned, operated and maintained by Lee County. The park features various amenities to serve its guests:

Newton Park is a historical site located at 4650 Estero Boulevard, near Publix. Newton Park offers Cheeki Hut shade structures, picnic tables, restrooms, showers, parking, drinking fountains and a beautiful view of the Gulf of Mexico from dusk to dawn. Newton Park is also available for rentals such as weddings, parties or other special events. Newton Park is a beach front property and historic home rich in island history associated with Jim and Ellie Newton whose extensive friendships with Thomas Edison, Henry Ford, Harvey Firestone, Charles Lindbergh, and others are recorded in Jim Newton’s book, “Uncommon Friends”. Outside sources have provided funding for acquisition, development, and maintenance, making this community resource possible at little expense to the Town of Fort Myers Beach.

Island resident Jim Newton (1905-1999) gained notoriety through the publication of his book, “Uncommon Friends” where he details personal relationships with key figures of the twentieth century including Thomas Edison, Henry Ford, Harvey Firestone, Charles Lindbergh, and Dr. Alexis Carrel. While these relationships were forged largely in Fort Myers beginning in the early 1930s, Charles and Anne Morrow Lindbergh and their children regularly visited the Newton’s at Seven Seas – their beachfront home on Fort Myers Beach built in 1953. Charles was the best man at Jim’s marriage to Eleanor (Ellie) Forde (1899-2003) in 1943 and the Beach served as the launch for joint sailing ventures on the sailboat Aldebaran.

Seven Seas served as a major focus of Jim and Ellie’s lives on our island as they lived, worked, and entertained. Through their involvement in the Moral Re-Armament (MRA) movement internationally known persons visited Seven Seas including British tennis player “Bunny” Austin, Cardinal Konig, Frits Phillips former chairman of the Philips electronics company, King Michael of Romania and Queen Anne, among others. Many islanders remember fondly the opportunities to meet the Newton’s visitors and some became involved in the MRA.

While some of the above named historical figures and movements are controversial, the Newton’s associations represent a unique facet of the history of Fort Myers Beach. Jim Newton’s book, later documented on film, and two of Ellie Newton’s published works, “Echoes from the Heart” and “I always wanted adventure” were penned at Seven Seas. Ellie was honored in 1998 by Florida Secretary of State Sandra B. Mortham with an Outstanding Women’s Achievement Award for her accomplishments in Florida and beyond. Local businesswoman Fran Myers and then County Commissioner John Albion honored Jim Newton through the creation of the nonprofit Uncommon Friends Foundation in 1993 with a mission to “instill ethics, moral values and a sense of purpose in tomorrow’s leaders”.

By virtue of the Newton’s personal associations and the gatherings that took place at Seven Seas, the Town of Fort Myers Beach successfully obtained $2.3 million in grant funds from the state of Florida's Florida Communities Trust program and Lee County to acquire the estate in 2003. Additional funds came from the Lee County Tourist Development Council and Town park impact fees to develop the property into a passive park and community gathering place for all to enjoy.

What does the Blue-Green Algae State of Emergency mean for Fort Myers Beach?
On June 30th 2016 Governor Rick Scott issued an Executive Order for Lee County on the west coast related to blue-green algae. That set in motion a series of events including limiting the flow of water into Lake Okeechobee and reducing discharges to the west from the Lake. The inclusion of Lee County in the Executive Order ensures that the Town of Fort Myers Beach will receive fair treatment and trigger additional resources to help combat poor water quality if such conditions occur. 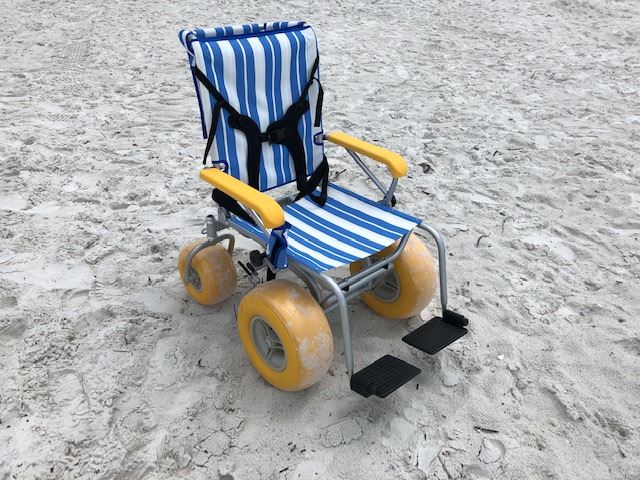 The Town has these wheelchairs for loan to people with disabilities who would like to enjoy the beach in a chair that is adapted for the environment.

A deposit will be necessary and an agreement will need to be completed. View and download the agreement.